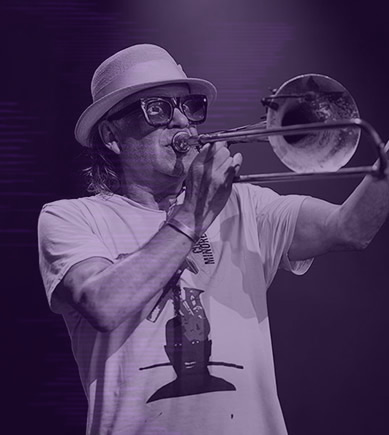 Wolter Wierbos is considered to be one of the world’s leading trombone players. He has played throughout Europe, Canada, USA and Asia. Wierbos won numerous awards including the Podiumprijs for Jazz and Improvised music and the most important Dutch jazz award, the VPRO Boy Edgar Prize. His musical interests range from precise chamber jazz to throbbing post punk and contemporary composed and improvised music. Wierbos was involved in theatre, dance, television and film projects.

He features in more than a hundred CDs and Vinyl LPs. Like many Dutch brass players Wolter Wierbos started out in a ‘fanfare’ (brass band), switching from trumpet to trombone when he was 17.  Since 1979 he forms part of the Dutch ensemble Instant Composer’s Pool (ICP). He has performed with Henry Threadgill, The Ex, The Berlin Contemporary Jazz Orchestra (led by Alexander von Schlippenbach), the European Big Band (led by Cecil Taylor), Sonic Youth, the John Carter Project, Mingus Big Band (Epitaph, directed by Gunther Schuller) and many others.

Wolter Wierbos teaches at the ArtEZ Conservatory in Arnhem.